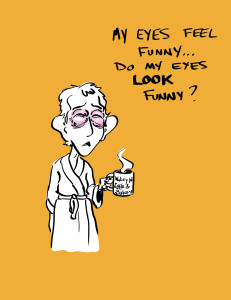 The first time I discovered margaritas (and enjoying quite a few), I woke up the next morning without eyes!  Who knew simply enjoying a tasty alcoholic beverage would make you wake up without eyes?!  I mean, the “windows to my soul” were swollen shut – well, almost; I could see that I looked like a cartoon character, and when I went to get up, I almost tripped on the bags under my eyes – no kidding!

Completely freaked out, I put a cucumber slice on each eye and started googling “puffy eyes” – not an easy thing to do, mind you, googling and trying to keep cucumber slices on swollen eyes – and the first thing that came up in the search was Preparation H, calling it “the best kept Hollywood secret,” a miracle product with immediate results!  Being Russian and unfamiliar with the product, I thought it was an extravagant eye cream.  Ok, so I was in a hurry and didn’t read the product description, AND it’s  not exactly easy to read with swollen eyes with cucumber slices on top!  I was desperate, and I ordered my American husband to get me some – stat!  He looked at me slightly glassy eyes, then asked me in a concerned voice why I needed it.  When I explained that I was going to put it on my eyes, he gingerly said “Honey, I don’t think it’s a good idea to put hemorrhoid cream on your eyes.”  It took me a few seconds to process “hemorrhoid” and connect it with ass, during which time my husband contemplated whether I had gone mad or if this was just another cultural difference between him and his exotic Russian wife.

Being kind of educated in the area of topical treatments, and remembering that painful hemorrhoids needed to be shrunk to reduce pain and inflammation, I connected the dots and proceeded without fear – I was going to put butt cream on my face!  If it could work on your butt, why not on your face?  And besides, celebrities were using it, why shouldn’t I?  I’ve always loved multi-purpose products – shampoo/conditioners, cheek/lip stain, Swiss Army knives – butt/eye cream sounded a like a great addition!

It worked – REALLY WORKED – and in about an hour my eyes were nearly back to normal.  And I continued to use it occasionally until becoming a health freak, when I reluctantly gave up my tasty margaritas.

I actually forgot about the problem of puffy eyes, until my son came along and had to be fed every 2 hours day and night.  This brought the concept of puffy eyes to a whole new level.  Then I remembered I had bought Preparation H during my pregnancy for its intended use – “butt cream.”  Looking over the ingredients again, I was surprised to find that the FDA had required my old friend to be reformulated – God knows why they always have to make a good product worse – and now it didn’t work for the butt or the eyes!

Reformulation of Preparation H in the USA now contains an astringent called phenylepherine, instead of Bio-Dyne (also known as Skin Respiratory Factor, which is yeast).  Another google search came up with the following facts:  clinical studies from the Cincinnati Burn Unit and Oregon University School of Medicine show that Bio-dyne speeds wound healing burns and post surgically. Bio-Dyne is biologically active on skin cells.  This active ingredient has even been isolated as a protein fraction containing a mixture of several peptides.